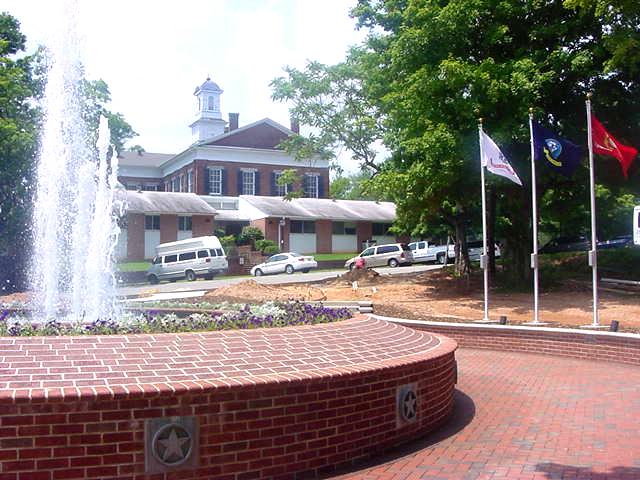 Columbus, the county seat, is the setting for the beautiful Courthouse, built in 1857, which has been in continuous use since that time. The town is also the site of much economic growth. Nearby Stearns Park and the Courthouse Square host many community events. Columbus also has St. Luke’s Hospital. One of the most beautiful views of the Columbus area can be seen from White Oak Mountain.

Nestled in the Foothills of the Blue Ridge Mountains, the Town of Columbus is the center of rural Polk County’s heritage and history. Columbus is the first town entering North Carolina where travelers get a full view of the mountains. Its rich history invites people from all walks of like to come for a visit, enjoy a weekend, or for a longer stay. The town has a varying population, including people born in Columbus, saying there’s no place more like home to residents from all over the country, saying the have finally found their paradise.

Columbus is located in the Thermal Belt, known for its mild temperatures, yet experiences all four seasons. Spring and fall are particularly extravagant, with Columbus being a popular fall destination for leaf viewing as well as home to many botanical areas.

With breathtaking mountain views and a small, hometown friendly atmosphere, Columbus is a perfect destination for those looking for a mountain vacation, a ride through the country or calling the best place on earth home.

The unique history of Columbus dates back to the 19th century and is still preserved today. The 1989 courthouse is situated in the center of town and is the 8th oldest courthouse in North Carolina that is still in use.

The Courthouse was completed in 1859, four years after the county was formed. The builders were Ephraim Clayton and George Shackelford, and they were paid $16,836 for their work. The bricks were made from native clay and baked nearby. The design is Greek Revival style which was popular in North Carolina during the 1830s, 1840s and 1850s. Some of the features are matching spiral stairs in the entry way, a cupola made of hand hewn lumber and a cast bronze bell which dates to 1858. The Courthouse is also thought to be the first in North Carolina to have a woman juror, which occurred in 1944.

Columbus was designated the county seat in in 1855 with the state commissioning representatives from nearby counties to locate the seat at or within two miles of the country’s geographical center. The town was meticulously carved from 100 acres of pure wilderness on what was originally known as Fosters Racepath, in the shadow of Foster’s Mountain, known today as Chocolate Drop.

Names after the Father of Polk County, Dr. Columbus Mills, a then N.C. Senator, the town was originally laid out with a church at each of its four corners. Many of the town’s streets are still named today after many of the town’s founders. Another town attraction is Stearns School, which was built in 1916 and named after Frank Stearns, who created the Central Industrial Institute in Columbus in 1891. The old school today serves as the central office of Polk County Schools.