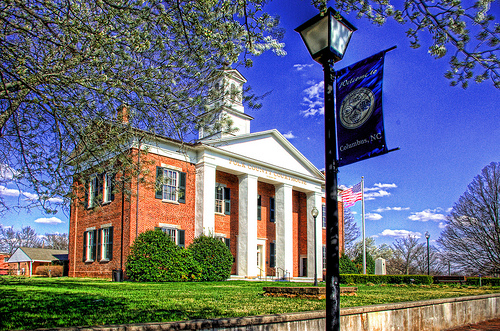 By 1540, some 47 years after Columbus discovered the New World; Hernando DeSoto had arrived in the mountain country, probably here in Polk County, where he found the Cherokee Tribe already in an advanced state of civilization. The Indians lived in substantially built log houses. Though accomplished hunters, they subsisted chiefly by their knowledge of agriculture. They raised corn, pumpkins, and beans.

The area was a fine place in which to live, as the first white settlers quickly learned. Several decades before the Revolution a sprinkling of families had set down their roots in the mountain coves in the midst of the Cherokee hunting lands. By 1768 traders were already traveling up the old Blackstock Road from Charleston to bargain for furs and hides. The proximity of the two civilizations resulted in many clashes and much bloodshed. The conflicts became so numerous that the Royal Governor, William Tryon, himself journeyed west from the colonial capital to parley with the Cherokees and negotiate a boundary line.

The new line agreed upon extended from a point near Greenville in South Carolina to the highest peak on White Oak Mountain. When the treaty had been signed, Governor Tryon was flattered to learn that the settlers had named the highest place on White Oak at Tryon Peak.

Determination of the boundary, however, failed to ensure safety for the pioneers to the east or for Indians to the west. Many vicious raids continued despite the establishment of forts. One of the heroes of the time was the Indian, Skyuka.

As its population slowly increased, the area became a favorite stopping place for drovers transporting livestock from Kentucky and Tennessee to seaboard harbors. With political independence, towns gradually emerged.

Polk, named to honor the Revolutionary War hero, Colonel William Polk, did not achieve county status until 1855. Columbus, the county seat, was named for Dr. Columbus Mills of Mill Spring. One of his ancestors, Colonel Ambrose Mills, was a Loyalist who was hanged by Patriots after his capture at the Battle of Kings Mountain. An imposing courthouse, built of handmade brick in 1855 distinguishes the Town of Columbus. The ancient slave block still remains on the courthouse lawn.

Tryon is the largest city in the area and is most unusual in the versatility of its residents. Half the population has migrated from other parts of the country to enjoy the mild climate and beauty of the surrounding countryside. The transplanted residents are chiefly writers, artists, educators, professional people and industrial executives who are fascinated with the tranquility of the community life and who contribute so greatly to the social advantages of the city. The Hunting Country abounds in large estates and stables to make an equestrian paradise. There are hundreds of miles of marked riding trails. The fox hunts, horse shows, and steeplechase are well known throughout the country.

Saluda, on the countyâ€™s western border, has long enjoyed fame as a vacation area and place of retirement. Many of the Low Country people seek its pleasant summer climate as well as the sheer beauty of its mountain setting. Saluda is noted for its fine apple orchards, which constitute the main source of farm income.

Other communities such as Mill Spring, Sunny View, and Green Creek have retained the charm of the Old South. The local roads are all good and provide easy access. An interstate highway, extending from Charleston to Asheville, provides convenient egress from the outside world.

The mountain slopes of the region experience a climatic phenomenon is known as the Thermal Belt. This is due to a temperature inversion, which results in a belt, rather indefinite in width, wherein the frosts of the valley â€“ or the freezes of the higher altitudes â€“ do not occur. Botanically, the area is rich in native flora.

The inborn courtesy of the native people makes even daily shopping chores a memorable experience with, You all come back.